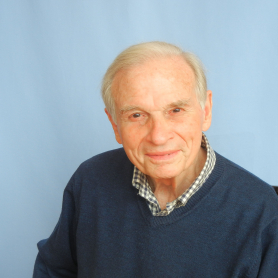 There’s something a little unusual about Byron Attridge.  It has nothing to do with his impressive 42-year career at one of Atlanta’s largest and most respected law firms.  And it’s not anything about his 57-year marriage to Florence, his beautiful wife or his three grown children. It has to do with where Byron was born. It was right here in Atlanta. You don’t meet many Atlanta natives like Byron Attridge. And you certainly don’t meet many as accomplished and interesting as him.

Even Byron admits that his geographical birth status is somewhat of a rarity. “Most people you meet have settled here after leaving another state,” says Byron. “Atlanta is one of the great places for people to come to. And it always has been,” says Byron. He claims Atlanta was always a city that’s been run very well, even during the Great Depression. That’s around the time Byron made his entrance into the world.

Byron was raised in the Virginia Highland area of the city. He went to Inman Grammar School and Grady High School. He took his first leave of the city to get his undergraduate degree in Liberal Arts at a little place called Princeton. “It was far!” claims Byron. “I only came home once a year at Christmas!”

Having been part of the ROTC in college, Byron was proud to serve in the army, post-graduation. He spent most of his time in Germany. When his term was finished, he headed back to Atlanta, of course, and got his law degree from Emory University.  He then joined the then 100-year old Atlanta law firm of King & Spalding and began what would be an impressive four-decade career as a trial lawyer.

Recalls Byron, “Just about all of my matters and cases as a trial lawyer were fascinating. That’s because I just loved the practice of law. The firm was well-established when I joined and it was delightful to have older people to guide me and show me the way. I had the privilege of representing the Atlanta Housing Authority. I was also appointed by Mayors Ivan Allen and Sam Massell to the Community Relations Commission of Atlanta, which was involved in solving inner city problems, much like the ones that are being experienced around the country today. It was very interesting work and I really got to know a lot about the city.” And Byron got to know a lot of interesting people as well. “Because of the nature of our firm, I met many people in politics…many senators and governors. We worked with people who ran the city, the state and eventually the country.  I even got to know President Carter!”  He adds, “I couldn’t have been more fortunate to be where I was, when I was.”

Now retired, Byron and his wife Florence are still in Atlanta (of course!) They’ve been active in the Christian community in Atlanta and internationally and were involved in the founding of the Church of the Apostles in Atlanta.

The couple now happily resides at Lenbrook. They chose the community because of the convenient Buckhead location—the area where they spent most of their life. Both he and his wife are very active in the community—he sits on several committees and even helps organize the monthly speaker program. It’s not surprising that he’s taken on such a leadership role at Atlanta’s Lenbrook. It appears that is something Byron Attridge was just born to do.

Do you have a mentor or role model?

Byron responds, “I was very blessed and fortunate to have many mentors in the older partners at my law firm. One particular one was Charles Kirbo, who was a partner at the firm and went on to be an advisor to President Carter.”

How do you spend your leisure time?

“I like to hunt and fish.  And my wife and I always love spending time with our children and grandchildren.”