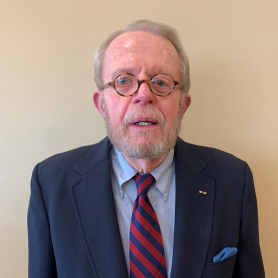 Lewis Davis is very much a familiar face around Lenbrook. And it’s not just because he has happily lived here since 2013.
Lewis is such a recognizable fixture in the community because he’s so involved. He enjoys the fitness center. He often attends the many on-site performances by the likes of the Atlanta Opera and Symphony Orchestra. He takes part in off-campus excursions such as trips to the Beltline or even to the city’s signature ferris wheel downtown. Lewis is so involved in Lenbrook, he is the sitting President-elect of the Residents Association and in 2020 will be the official President. So, when we say he’s “on top” of things at Lenbrook, that’s quite literally true!
“I’ve been on MANY committees. I was the Chair of the Communications Committee. I was Member-at-Large for the Building and Grounds Committee and Housekeeping. We have 12 standing committees, so there are nine more I will be involved in. I guess my hobby right now is learning about every aspect of Lenbrook.”
Lenbrook is lucky to have Lewis. He is one of the many extremely talented and interesting residents who bring so much to our community. And he brings so much because he has done so much in life.
Lewis grew up around the south and after spending a year at the University of Georgia, he joined the U.S. Air Force which set him in London, England for four and a half years. When he left the service, he was hired by AT&T. The corporation had him “wearing many hats” and living in various parts of the country. With AT&T, he moved to New York, New Jersey, Washington D.C. and Atlanta.
In addition to living all over the world, Lewis has traveled all over the world; Brussels, Paris, Normandy, Geneva, Madrid and more. But these days, he doesn’t have to go far, because he claims he has everything he needs at Lenbrook. He can’t point out one favorite thing about the community because, he says, it’s really “the whole of it” that impresses him. “The amenities are outstanding. We have excellent associates. We have very well-qualified managers. We even have excellent pastry chefs!”
Lewis Davis has really thrived at life, and at Lenbrook. With him at the helm as next year’s Resident Association President, he will contribute the fruits of his vast experience, his insight and his many gifts. Thanks to resident Lewis Davis, we know Lenbrook is going to thrive, as well.
A person who you admire.
“Dwight Eisenhower. I was able to see him speak when I was stationed in England. He was President then and paying a state visit. He was very impressive. I even got to shake his hand!”
Your proudest moment.
“When I was awarded the Air Force Commendation Medal. It was given to me because I saved the government $34 million annually by helping to bundle all the armed forces communications into one network.”
When you laughed the hardest.
“Well, whenever I watch “Blazing Saddles.”  I know what’s coming, but I still laugh hard.  I don’t know how Mel Brooks comes up with these things…”
Return to Meet the Residents >
PrintShareSave