CEO's Off the Clock: Working it Out 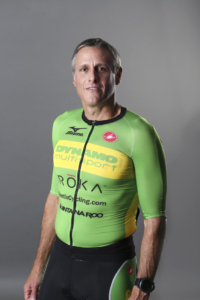 You might not envision lap lanes in a swimming pool as an ideal spot to socialize. But three area executives found time between breaths to discover their shared passion: participating in Ironman competitions that require a 2.4-mile swim, a 112-mile bike ride and a 26.2-mile race—in that order, without resting in between.

Chris Keysor, president and CEO of Lenbrook, a 500-resident senior living community in Buckhead, met Chris Johnson, the owner of three Buckhead and two Stone Mountain McDonald’s franchises, in the water at Dynamo Swim Center in Chamblee. Brad Buie, principal and vice president of Atlanta Capital, is a friend of both who shares their dedication to training for the water leg of competitions. And all share a drive to be physically fit with activities that help them shake off the stress of work.

“It’s fantastic to get my blood pressure up without being mad at someone,” says Johnson with a laugh. “It’s a stress reliever. I can be alone in the pool, on a bike or a run listening to music. It’s therapeutic.”

Johnson, 39, has competed in three full Ironman competitions and nine half-length contests. And the toughest part is still the swimming. “I’m used to being on two feet rather than in the water, so I have to work at it. My favorite distance is the half- Ironman, 70.3 miles. The last one I competed in was last year in Chattanooga, and I won my age group, 35 to 39. So I’m getting better.”

A former football player at Stanford in California who now lives in the West Paces Ferry-Northside area, Johnson enjoys keeping a competitive edge. “I like challenging myself and pushing my body. And before we had kids, it became our travel. I did destination races in New York, D.C., Chicago, Alcatraz, all over. Now, it’s a good example for my kids (5-year-old Eliza and 7-year-old Zaeem). They’ve even done some kid triathlons. So we’ve turned it into a family event.”

Chris Keysor, who turns 50 this month, has completed one Ironman and tries to squeeze two or three half-marathons into his schedule each year. The competitions are often an event for his wife, Jolie, and their kids, 12-year-old Zoe and 9-year-old Aiden, to attend and watch. They’ve accompanied him to events, and the kids have even joined him across the finish line a few times. “My son is starting to run with me now, so that’s fun. Last year, I was in an Ironman in the United Kingdom, and the whole family got to go, and we spent a week in London and a week in Paris. I also get to share [experiences] with my extended family at Lenbrook: Co-workers have put notices about my races on the doors, and the residents make me tell stories about what I’m doing.”

Keysor, who grew up in Florida, says his best sport is biking, and he works at it on a trainer in his basement for more than four hours most Saturdays. “I’ve also spent the last few years working on my run, but it’s the swimming that continues to be elusive.”

Buie, who lives in Brookhaven with his wife, Nicole, 12-year-old Kaitlyn and 9-year-old Will, also makes triathlons something for the entire family to share. “The kids got into it as I did, and they also compete,” says Buie, 45. “We don’t work out together, but I do run with my daughter in the neighborhood.”

A long-distance runner as a teen, Buie decided to try triathlons in 2010 after seeing an Ironman championship in Hawaii. “I thought it would be something I’d like to try someday, so when I turned 40, I thought it was a good time to mix it up and not put as much stress on my body from just running. But running is my strength; I had no experience with swimming, so that’s my learning curve.”

In the three contests he’s entered, Buie says his performance has been “okay, but not as good as I’d like. “In most races I’m typically in the top 5 percent of my age group. My goal is to be in the top 2 percent.”

And he also wouldn’t mind beating his buddy, Keysor.

“We’ve done two races together, and he’s beaten me both times. But I wasn’t too far behind!”