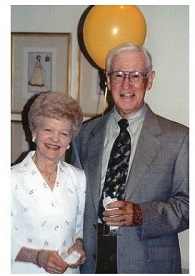 Ford “Doyle” Rucker met his future wife Dorothy on an elevator ride on a coffee break while working in Atlanta in the early ‘40s. The Buckhead residents were married in August 1942. He happily recalls his confidence about making Dorothy his wife soon after that short meeting.

“I wanted to propose to her that day,” he said. “My coworker gave me her number. I called her that same night.”

Rucker “was born in Crabapple, Roswell, the son of Roswell Mayor [T.W. “Ford”] Rucker,” said Patricia Robinson, their second daughter, who was visiting her parents.

Mrs. Rucker was born in Gainesville.

“She was very simple to date,” Rucker said. “With Dot you could have a date for 30 cents. She would only have a Varsity [frosted] orange.

“I enlisted the day after [the Japanese bombing of] Pearl Harbor and was a first lieutenant in the 9th Troop Carrier command.”

Rucker was promoted to staff sergeant four months after enlisting and was abroad for three years. After coming back the couple had three children, all girls. After the war he remained in the Air Force in Miami and Rome before getting discharged.

Of the marriage, Rucker said, “I do not remember having any fights.”

He credits the success of their marriage to their Christian faith as members of Beecher Hills Baptist Church in southwest Atlanta.

“We have had a great love affair,” Rucker said.