Why One CCRC Has an Edge Against the Rest 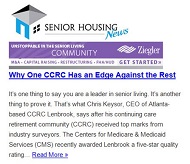 It’s one thing to say you are a leader in senior living. It’s another thing to prove it.

Although this was Lenbrook’s first year being rated by CMS, since it just became Medicare-certified in spring 2013, the CCRC joins the ranks of about 20% of the nation’s 15,000 Medicare-certified skilled nursing facilities to have earned the top rating, which takes into account health inspections, staffing and quality measures.

Lenbrook was the first CCRC in Atlanta to earn national accreditation in 1992 and remains the only CCRC in the metro area to have done so. It is one of about 13% of the nation’s roughly 1,800 CCRCs that have earned the accreditation.

“The goal with accreditation is to promote excellence in this field — to have standards that support what excellence is for a CCRC,” says Sue Matthiesen, managing director of Aging Services and CCAC. “In order to really look at the quality of a CCRC and help organizations improve, you have to have a system of standards that looks at everything.”

CARF-CCAC — the nation’s only accrediting body for CCRCs — analyzes a number of categories of standards including, among other areas, leadership, governance, strategic planning, input from persons served (residents, clients, patients, etc.), financial planning and management, performance improvement and human resources.

With increasingly savvy consumers who are looking critically at CCRCs now more than ever, having these measures of quality in place may ease the minds of prospects.

“We all have to be more informed about how to present not only the beautiful campus and the wonderful amenities, but also the data to show we are a quality organization,” Matthiesen says. “The opportunity to have residents move in requires us to really think through how we’re going to make sure they know this is a sound investment of money and also a good lifestyle for them.”

CCRCs nationwide have arguably faced an uphill battle following the economic downturn, having to regain the confidence of prospective residents who fear financial instability when considering the senior housing type.

In turn, CCRC providers are working harder to attract residents in order to boost and maintain occupancy levels.

“The new consumer moving in is a tougher consumer,” Keysor says. “They want choice, flexibility, options. And they want to know that when they invest their money it’s going to be safe. So you have to work harder to gain their confidence.”

But having stamps of approval from CMS and CARF-CCAC can help providers make the cut.

Though a five-star skilled nursing rating or accreditation might not mean the organization is perfect, it does help potential residents sift through the thousands of senior housing communities nationwide to find quality providers.

“If you’re a consumer shopping across the country for a CCRC, probably the first thing you would do is online research to say, how can I judge 100 CCRCs and narrow it down to 10?” Keysor says. Accreditation is “oftentimes that first cut residents will use.”

Accreditation also addresses some of the concerns residents have regarding a CCRC’s financial stability.

“Every year accredited CCRCs submit to us their audited financial statements so we can evaluate how they’re doing,” Matthiesen says. “That does not guarantee that every CCRC is doing perfectly financially, but it does guarantee that another set of eyes is looking at those financials.”

In addition, having a five-star rating from CMS can give CCRCs an edge against competition.

“[The five-star system is] one of the ways the consumer can find out information prior to either moving into the skilled nursing facility or even when evaluating an independent living apartment [at a CCRC] — knowing that health care is a big consideration down the line,” Keysor says.

While nods from CMS and CARF-CCAC may influence a prospect’s decision to consider a community, they also impact business operations.

“We’re always looking for that tool we can place in our system to reach a higher standard,” Keysor says. “It’s one thing to say we want to be a leader in senior living; it’s a totally different thing to measure that and know if we’re achieving it or whether we need to make a change.”

Every five years Lenbrook undergoes a full onsite survey by CARF-CCAC practitioners, who inspect the community and its operations, and interviews residents, employees and the board of directors.

In between those five years, Lenbrook also submits annual quality compliance and financial reports to the accrediting agency.

Four key areas are considered for accreditation: resident life and services, resident health and wellness, financial resources and disclosure, and governance and administration.

“That accreditation really is at the heart of who we are,” Keysor says. “We do reassess it every five years, oftentimes in discussions with our board members, to make sure it’s not just at our heart but in our hands and making sure it’s providing value to us.”

CARF-CCAC’s standards help Lenbrook identify where the “critical trends are in the future,” Keysor says.

For example, the accrediting agency has required CCRCs to have emergency response systems in place for about five years, while only recently this has emerged as a topic for federal regulation, he says.

One of the aspects Keysor says earned it a five-star rating is its commitment to improving staff turnover. When the CCRC began measuring turnover, it had a goal of 33% turnover campuswide. For the past two years, the community’s goal dropped to 24% turnover. And last year, Lenbrook had only 20% turnover. In comparison, the industry average for staff turnover rates among CCRCs is 34%.

“We work hard through creating a compensation plan, making sure there is good internal equity in terms of pay, and good marketing — looking at everything from training to associate relations to providing awards when we do something well,” Keysor says.

So when measuring quality and encouraging performance improvement, both the CMS rating and accreditation work hand in hand.

And to compete in an increasingly competitive landscape, Lenbrook hopes to maintain these high marks as ways to stand above the rest.

“Senior living is a very changing environment, and it’s going to be a challenging time moving forward,” Keysor says. “You’re going to have those folks that raise up to the challenge and those that don’t.”