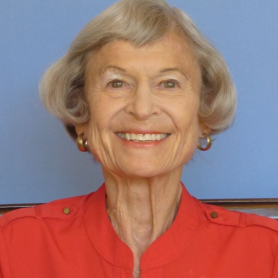 Lenbrook resident Dorothy Beasley had a long and distinguished legal career.  So much so, reading her resume of accomplishments (many ground-breaking!) takes an impressive amount of time.

After getting her BA from St. Lawrence University in upstate New York, Dorothy went to work for the U.S. Department of State in Washington D.C. She then got her law degree from American University Washington College of Law.  Her first legal job was as a law clerk for the three circuit court judges in Arlington, Virginia, after which she was an associate at the law firm of Shadyac, Berg & Nolan.

Dorothy moved to Atlanta when she married William H. Beasley, Jr. She continued her legal career, first being hired by Fisher & Phillips law firm when most firms would not even interview women to serve as lawyers.  She then became an Assistant Attorney General for the State of Georgia, Criminal Division, representing the State in federal courts and in a number of cases before both the Georgia and U.S. Supreme Courts.  In 1977, Dorothy was appointed by Governor George Busbee as the first woman judge on the State Court of Fulton County.  In 1984 Governor Joe Frank Harris appointed her as the first woman judge of the Georgia Court of Appeals.  She was repeatedly re-elected without opposition and served on the appellate court for almost 15 years. She persuaded her brethren to revise the Court’s motto to include women so that it now is: “Upon the integrity, wisdom and independence of the judiciary depend the sacred rights of free men and women.”  She was the only woman on these two courts except for the last three months on the appellate court.

Subsequently she worked for the National Center for State Courts in the International Division and, after returning to Atlanta, as a mediator and arbitrator at Henning Mediation & Arbitration Service.

As to all the stages of her career, Dorothy says,  “I’ve was very, very lucky with my career.  Many people helped me and pushed me along.  I happened to be at the right place at the right time for women.”

Now retired, Dorothy has found herself in another “right” place: her home at Lenbrook.  She truly appreciates it.  In her words, “Living at Lenbrook is like living in a hotel, at a university, on a cruise ship or at a club, all at once.  And you’re living it all surrounded by a huge family.  You put all those things together, and that’s a great life.”

Having always done so much, it should come as no surprise that although Dorothy is now retired, she is simply, as she puts it “rewired!” In addition to being involved in on-site activities (gardening, Writers Roundtable, attending events, taking the shuttle to the Symphony), Dorothy volunteers with the refugee resettlement program of Inspiritus, formerly known as Lutheran Services of Georgia, and is involved in St. Jude’s Children’s Research Hospital in Memphis.  She also promotes for Georgia schools Justice Sandra Day O’Connor’s initiative called iCivics, an online interactive learning program that innovatively teaches children about civics, what government is and how it works.  “It teaches students also to know what their responsibilities and opportunities are as citizens.”  She is a volunteer for the Red Cross in the teaching of international humanitarian law (the law of armed conflict).

What made you decide to move to Lenbrook?

“Two years ago, I moved back to Atlanta from St. Simon’s Island.  I was looking at condos.  But then I realized, I’d be lonely living by myself.

“I knew several people at Lenbrook and they loved it.  So, there was no question about where I wanted to live.”

What do you think sets Lenbrook apart?

“Attitude—everyone here is so friendly.  And everybody who works here seems to like working here.  They appear to strive to make things the best they can be.

Who is the most interesting person you ever met?

Without hesitation, Dorothy replies, “My father, Judge Stephen Toth.  Because of who he was and what he came from.  His parents were poor peasants who immigrated from Slovakia.  Yet, without a college education, he went to law school at what is now Rutgers in New Jersey and became a sole practitioner, a Bergen County prosecutor, and then a judge on trial courts in Bergen County, New Jersey. He was always helping others, served in various civic and church organizations, and was totally devoted to his family.”

Have you ever met anyone famous?

“I’ve been very fortunate to have become acquainted with Justices Sandra Day O’Connor and Ruth Bader Ginsburg, corresponding with them and visiting them when I was in Washington.  And Justice Stephen Breyer was in a class with me taught by Justice Harry Blackmun in Aspen. It was evident, even then, that he was brilliant.”

Dorothy adds, “I guess if you move in legal circles, it is rather inevitable that these are the famous people you may meet!”

Is there anything else you’d like to say about Lenbrook?

“Yes!  I’d like to say thank you to the people who work here.  The servers.  The grounds people.  The staff.  Chris and the board.  I really want to thank them for all they do.”