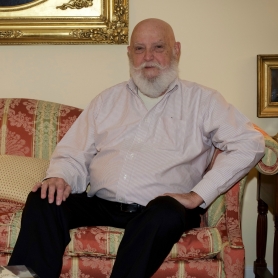 The residents of Lenbrook are grateful that Ed Lummus moved in for many reasons.  He’s a generous volunteer, a decent Bridge player and an all-around good guy.  But the one thing people don’t realize that Ed brought to the Lenbrook table is warm, delicious and happens three times a week.

“I am on the food committee and I got one of my favorites on the menu!”  Ed suggested that cornbread be added to the many choices at the on-site dining areas and Lenbrook listened.  “Now it’s served three times a week and it’s delicious.  ‘Proud to say I did that!”

Ed and his wife, Edith, moved to Atlanta’s premier senior living community about two years ago, long after Ed’s early retirement.  They had mostly lived their lives in Georgia–in Columbus and around the Brookhaven area.   Lenbrook’s stellar health care was the main reason they chose the community.  Little did they know that just a short time after moving in, it would save Ed’s life.  A minor foot ailment sent Ed casually visiting the on-site clinic, where they immediately recognized a serious problem.  “I didn’t realize it, but I had an infection.  The clinic immediately called my doctor, who hospitalized me.  Two operations later, I was back at Lenbrook in the Rehab Clinic on the second floor.  My stay was 32 days.  But every day I had lunch and dinner with my wife and we could look after each other.  It was nice.”

Ed’s all healed now and as active as ever.  “We are BUSY!”  he happily reports.   He and his wife enjoy water aerobics, play bridge and enjoy the frequent musical performances.  Ed is the head of the Religion Committee and also is an “influential” member of the food committee.    But Ed’s always been a busy guy, having had a very successful career in the mortgage banking industry and a very hands-on family man.

Ed thoroughly enjoys life at Lenbrook and has confidence knowing that quality healthcare is an elevator ride away, if ever needed.  He is a just one of the many accomplished neighbors at Lenbrook.  When he moved in, he brought his experience, his warmth…the cornbread…and so much more.  It will be interesting to see what he cooks up next.

“The thing I’m proudest of is that if anyone in my family needs something or someone, they look to me.  Brothers, sisters, in-laws, nieces, nephews….they know Uncle Ed will be there for them.  I’m proud I get the calls.”

Words to live by.

“I always try to live by the sign I saw at the YMCA on North Avenue:  ‘Live your life as the Lord would want you to.  You may be the only Bible that some people will ever read.’ ”

“The best thing about Lenbrook is the health care.  As far as I’m concerned, that has been the most beneficial.  Well, the Clinic saved my life!”