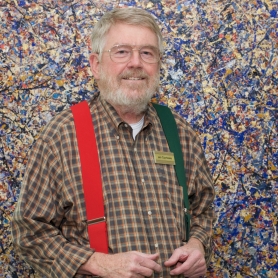 Anyone who thinks that all the new-fangled technology is only for millennials has never met Jim Cochrane.  This 7-year Lenbrook resident is not only computer-savvy, he has become a technical teacher to other seniors in the community.   He holds on-site classes for his neighbors, teaching them how to use emails and Facebook to stay in touch with family members and how to search the web for medical information or even a good movie.  He also formed the Geezer Squad, a volunteer group who offers free help with technical woes.  Thanks to Jim and his crew, Lenbrook residents stay up and connected without ever having to leave home.

It’s no surprise, sharp-as-a-tack Jim took the initiative to dive into technology at Lenbrook.  He has quite an impressive technical background himself.  He holds a BS and Masters from Georgia Tech and a PhD from NYU.  During his long career programming and designing computer systems, he held impressive positions with companies such as Bell Laboratories and Scientific Atlanta.  He and his wife, “Bear,” started here in Atlanta but moved all over the world, choosing to come back Georgia to retire.

“We lived at Lake Lanier for 10 years and we thought we’d try living in the city for a while.  Lenbrook was the ideal choice.”  Jim feels it’s the best of all worlds.  “We’re in the city, but living at Lenbrook is like living in a small town of just 500 residents.  People take care of each other.  And they are always willing to help.”

Computers keep Jim’s mind sharp, but living at Lenbrook has helped his body, as well.  Before the move, Jim wasn’t a workout person, but he’s become a regular in the gym.  He says it’s made his life so much better.  “My blood pressure is down and everything just works better.  It really has made a great impact on my health.”

In addition to teaching and repairing, Jim has always been very socially involved in Lenbrook, having led several of the many resident-run committees.  He is now head of the Excursion Committee that plans day trips to area restaurants and tourist sites.  Recently a group went to Gunshow, a bold fusion restaurant combining churrascaria-style dining and Chinese dim sum.  “That was an adventure!” recalls Jim.

Jim loves technology and loves his life at Lenbrook.

And thanks to him, you’ll see Lenbrook residents walking down the hall with their various devices sharing pictures of their grandchildren and friends.  That makes Jim feel happy and accomplished.  And for everyone, that’s how retirement life should compute.

“When the children grew up to be responsible adults.”

Words to live by.

“I try to live up to my wife’s motto which is ‘Too much is not enough.’  She’s taught me that.”

“Interacting.  Bear and I have gotten to know so many people.  More than we would have ever met living in a house.”