The Art of Life: Creating a joyful, interactive performance for all ages 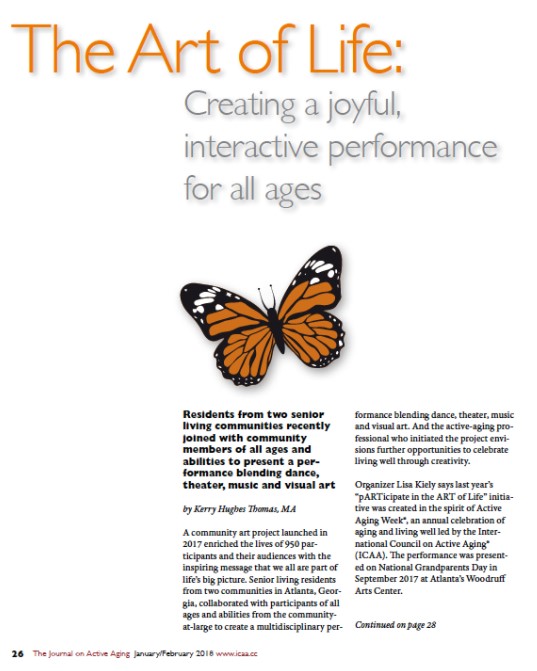 A community art project launched in 2017 enriched the lives of 950 participants and their audiences with the inspiring message that we all are part of life’s big picture. Senior living residents from two communities in Atlanta, Georgia, collaborated with participants of all ages and abilities from the community at-large to create a multidisciplinary performance blending dance, theater, music and visual art. And the active-aging professional who initiated the project envisions further opportunities to celebrate living well through creativity.

Organizer Lisa Kiely says last year’s “pARTicipate in the ART of Life” initiative was created in the spirit of Active Aging Week®, an annual celebration of aging and living well led by the International Council on Active Aging® (ICAA). The performance was presented on National Grandparents Day in September 2017 at Atlanta’s Woodruff Arts Center.

“It was simply all about bringing joy, connection and purpose,” Kiely comments of the event that involved musicians, dancers and artists from the Lenbrook and Park Springs senior living communities, the Atlanta Symphony Orchestra and the Decatur Family YMCA. The performers offered an innovative interpretation of the 1970s song Lean on Me beneath canvases of butterflies painted by the senior living residents and other community groups.

The project, designed to encourage active participation in the arts and community on all levels, reflects Kiely’s passion for enabling people of all ages to unleash their inner creativity and self-expression. As director of enrichment at Lenbrook and an ICAA Champion for the Changing the Way We Age® Campaign, she believes events like “pARTicipate in the ART of Life” demonstrate that successful aging is available to everyone. They also help spread her message that “successful aging means successful living.”

A journey begins
Kiely credits a chance meeting more than a decade ago with ICAA CEO Colin Milner and their subsequent conversations with inspiring her to accomplish her vision to create events using art and performance to bring people together and enhance the lives of older adults. In 2012, she helped organize a “flash mob” in the city square in Decatur, Georgia, featuring Park Springs residents and participants from Decatur Christian Towers seniors apartments, City of Decatur employees and residents, and YMCA staff and members.

“At first people thought it was silly,” Kiely recalls. But teamwork and detailed preparation culminated in an event that brought joy to participants and audience members alike. “The numerous people who formed the flash mob seemed astonished at the reaction to the five minutes of singing and moving. The audience grew to include over 200 people, all equally delighted at the pure joy on the city square.”

The response to the flash mob was “awesome,” Kiely says, and helped her realize that there must be many ways to “interweave a greater variety of creative expressions capturing many dimensions and domains of well-being.” That led her to envision “pARTicipate in the ART of Life,” although the final product evolved from her original ideas in order to meet the needs of sponsors and participants.

“In the beginning,” Kiely states, “I expanded the idea of the flash mob with an image of a ‘quilt.’ This quilt, this connection of individual canvases, would be the vehicle for an interactive art installation. Each person or organization would create a part of the bigger picture. It would be a dedicated piece of the ‘quilt’ with a name, age and place of origin identified on the back of each section,” she explains. “Once the quilt was complete, I envisioned choreographing it with music from the Atlanta Symphony Orchestra. The performance would be a gradual unveiling of this quilt showing how we are all part of the big picture of life. The display would include people singing and dancing in sync with each beat of the music.”

Eventually, Kiely and several resident champions and enrichment team members chose Lean on Me as the theme song because it “crossed generational and socioeconomic boundaries and spoke to everyone,” she says.

The “Life Span of the Monarch Butterfly” was chosen as the theme for the visual facets of the project “because it represents change and transformation,” Kiely continues. All four stages of the monarch’s development—egg, caterpillar, chrysalis and butterfly—are beautiful and significant, she says, an important reminder for humans of all ages and stages.

“This led to the idea of asking all people to create a monarch for our canvases,” Kiely states. “In total we had 11 canvases made by many different groups. They were on display the day of the event, and people were encouraged to draw their own, color in those already begun or to write their name on the canvas. This again emphasized that we are all a part of the big picture of life!”

Partners add resources
To bring the project to life, Kiely reached out to many individuals and organizations to partner with Lenbrook. “The partner resources came in many forms,” she says. “Volunteer workers. Available space. Great talent. Financial help.

“Park Springs immediately agreed to partner with us by contributing financially as well as creating two canvases, providing singing and dancing opportunities on their campus and enthusiastically participating on the day of the event,” Kiely shares.
“The YMCA also participated by creating canvases and learning the dance in preparation for the event. They participated in the event, with an audience of 400 people in attendance ranging in age from 5 years old to 100!”

Atlanta’s Woodruff Arts Center (WAC) agreed to help sponsor the event as part of a family day festival at the Center, which is one of the largest arts centers in the world and one of the few that offers both visual and performing arts on one campus. Because the project involved so many partners and so many diverse elements, notes Kiely, it was difficult to fully organize in advance.

“Because this idea was an organic process, we learned that we had to be open to things changing and evolving with some uncertainty,” Kiely says. Eventually, “the focus moved from having an end result to having a process where everyone could be engaged in what I called ‘community conversations.’ As part of these conversations, we looked at the project programming over a six-week period and considered all the various components that would touch the ‘pARTicipate in the ART of Life’ project.”

Those elements included:
• a theatrical component led by the Alliance Theatre
• ballroom dance instruction from Academy Ballroom Atlanta
• canvases created by Lenbrook and Park Springs residents plus participants from the YMCA and the Arches residential recovery center
• spiritual discussions on transformation led by Lenbrook chaplains using the monarch theme
• a line dance created by Lenbrook fitness managers to be practiced in exercise classes
• rehearsals of the lyrics for Lean on Me by the Lenbrook Singers
• music by the Atlanta Symphony Brass Quintet

In addition, groups from the YMCA, the Arches and Park Springs all worked on various aspects of the project in their own communities. And one butterfly canvas was created by a family who wanted to be involved.

Being flexible
Some of project’s initial designs were adapted to fit the format and needs of sponsors and organizers, according to Kiely. “When the WAC and Alliance Theatre agreed to underwrite the project, I did not fully understand that we were one part of a much broader program that day,” she says. “After better understanding this format, I realized that we needed to be flexible to be realistic and successful.”

Kiely’s original concept of several canvases, created by various groups, coming together to make one image was modified to provide “a quick and easy assembly and disassembly process” that would allow the performance to be staged in a variety of places and to compensate for a “potential shortage in manpower and resources,” she explains.
Adapting ideas and modifying plans to fit the changing circumstances provided Kiely and her team with many challenges, especially because the project had to be developed in only four months.

But Kiely says being willing to give up some control was critical to the event’s success. “A hard, fast plan on ‘exactly’ what the end picture would look like was not true to the themes of growth and life cycles,” she comments. “We came to value the resilience required by the project.”

Kiely praises Lenbrook, a nationally accredited, not-for-profit senior living community, for its enthusiastic support of the event. “This was the first-ever, break-the-mold kind of program at Lenbrook,” she states. “Lenbrook deserves great praise for supporting a program that was not initially easy to define, or one whose outcome we could predict with confidence.”

The support carried across the entire community, from exercise and art classes to worship services, where chaplains wove in the theme of transformation during three separate Sunday services while displaying a monarch butterfly image in the background. Ultimately, Kiely says, “Some 350 of our 500 residents touched this project in some way. Many were involved personally with the event, some attended, and others watched as it was live-streamed on the Internet in Lenbrook’s Events Center and into each person’s home on campus. These participant impressions and feedback are the greatest testament to the success of our ‘pARTticipate in the ART of Life’ project. That is the key driver for future events!”

‘A purposeful experience’
Kiely’s primary goal, as Lenbrook’s director of enrichment, is to ensure that participants are “present, engaged and enjoying a purposeful experience,” and she believes the Art of Life event met those goals. “This project provided residents more meaning, purpose and positive feel to some of the already existing enrichment programs enjoyed at Lenbrook, such as spirituality, singing, dance and art,” she notes. Since the September performance, residents have been asking what comes next and reminiscing about how much fun the event was.

Kiely learned a lot about how to create and organize events through this process, she says—“most importantly” that these programs require a lot of time. Organizers should have at least “a skeleton plan” of what will be needed to produce the event at least six months in advance, she says. And formal contracts should be made with participants, a lesson she learned when some organizations withdrew over the life span of the project.

“I also learned that people need more time and space to make mistakes and that they need to be reminded it’s about participation, not perfection,” Kiely comments. “Permission and encouragement to ‘play’ is paramount.”

Now Kiely is looking to the future. “Our plans are to make this an annual event, in conjunction with Active Aging Week and aligned with Grandparents Day, to help raise awareness and increase involvement in the event.” But she is also looking to enlarge opportunities for engagement and participation.

“My vision includes bringing everyone together virtually via live-streaming to display what is happening around the world,” Kiely shares. “Organizations can attend in person, live-stream or send in video in advance so it can be incorporated into a greater montage for the day of the event.”

Kiely would like to see that kind of global participation because, she says, “Ultimately, the meaning of this project is really all about the bigger picture of life—what I do in my life affects you, and what you do in your life affects me. We should create and embrace opportunities to unleash individual passions and creativity.”

See the "pARTicipate in the Art of Life " video here.

Kerry Hughes Thomas, MA, is a freelance writer who contributes on topics related to gerontology and the aging industry. Hughes Thomas has a master’s degree in gerontology from Georgia State University and a bachelor’s degree in journalism from the University of Wisconsin– Madison. Her 20+ year career includes roles in public relations, marketing and relationship management. In recent years, she has paired her love for writing with her love for older adults by partnering with an Atlanta-based hospice organization to facilitate and compose life stories for patients. Within that capacity, she was profiled in the Atlanta Journal-Constitution’s Living Section for its regular feature Extraordinary People in 2013.