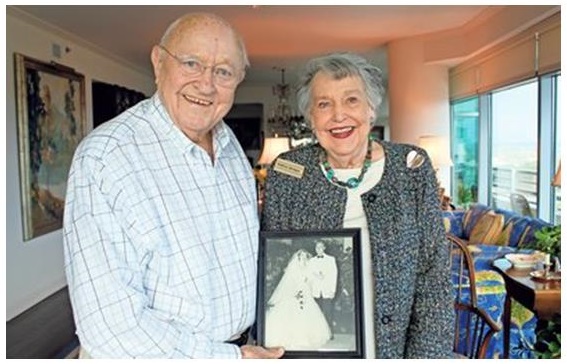 To celebrate the most romantic day earlier this year, the Neighbor Newspapers interviewed couples that have been married for at least 40 years to learn about their keys to a blissful marriage and their secrets to remaining committed to one another. Lenbrook residents Bill and Kathryn Bridges were featured in the article.

Buckhead residents Bill and Kathryn Bridges have enjoyed their marriage for 62 years with humor and laughter.

Their secret is they are “two patient people,” said Kathryn.

While Bill said, “Just one. That would be me.”

They do not remember having lasting arguments.

“I tried to not go to bed while still mad,” Bill said.

“You do that; I do not,” Kathryn said, laughing. “I went to bed mad and then I forgot.”

Bill said couples should let go of arguments and forget them.

“We get together often and have a lot of fun,” Kathryn said.

For their continuous harmonic relationship, “It’s a 75/75 kind of thing,” Bill said, talking about how they make it work. “You have to forgive and forget.”

Bill and Kathryn Bridges are shown with their grandchildren. (Staff – Margot Carvallo)