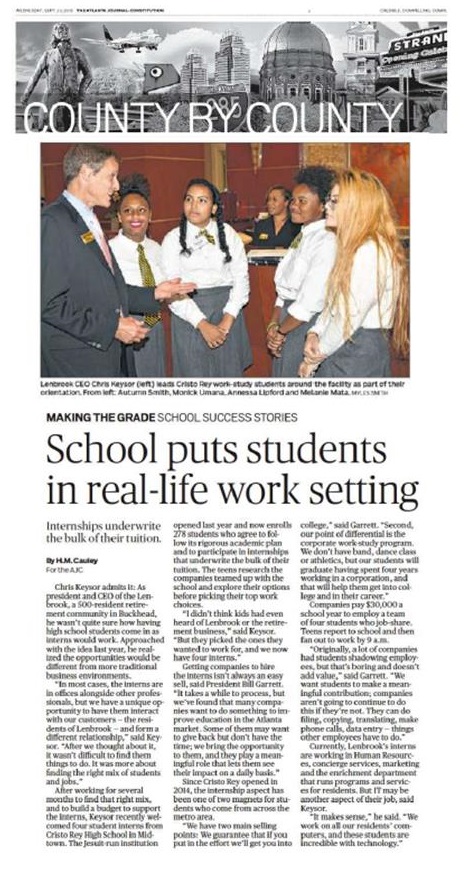 by H.M. Cauley, for the Atlanta Journal Constitution

Chris Keysor admits it: As president and CEO of the Lenbrook, a 500-resident retirement community in Buckhead, he wasn’t quite sure how having high school students come in as interns would work. Approached with the idea last year, he realized the opportunities would be different from more traditional business environments.

“In most cases, the interns are in offices alongside other professionals, but we have a unique opportunity to have them interact with our customers - the residents of Lenbrook - and form a different relationship,” said Keysor. “After we thought about it, it wasn’t it wasn’t difficult to find them things to do. it was more about finding the right mix of students and jobs.”

After working for several months to find that right mix, and to build a budget to support the interns, Keysor recently welcomed four student interns from Cristo Rey High School in Midtown. The Jesuit-run institution opened last year and now enrolls 278 students who agree to follow the rigorous academics and to participate in internships that underwrite the bulk of their tuition. The teens research the companies teamed up with the school and explore their options before picking their top work choices.

“I didn’t think kids had even heard of Lenbrook or the retirement business,” said Keysor. “But they picked the ones they wanted to work for, and we now we have four interns.”

Getting companies to hire the interns isn’t always an easy sell, said President Bill Garrett. “It takes a while to process, but we’ve found that many companies want to do something to improve education in the Atlanta market. Some of them may want to give back but don’t have the time; we bring the opportunity to them, and they play a meaningful role that lets them see their impact on a daily basis.”

Since Cristo Rey opened in 2014, the internship aspect has been one of two magnets for students who come from across the metro area.

“We have two main selling points: We guarantee that if you put in the effort we’ll get you into college,” said Garrett. “Second, our point of differential is the corporate work-study program. We don’t have band, dance class or athletics, but our students will graduate having spent four years working in a corporation, and that will help them get into college and in their career.”

Companies pay $30,000 a school year to employ a team of four students who job-share. Teens report to school and then fan out to work by 9 a.m.

“Originally, a lot of companies had students shadowing employees, but that’s boring and doesn’t add value,” said Garrett. “We want students to make a meaningful contribution; companies aren’t going to continue to do this if they’re not. They can do filing, copying, translating, make phone calls, data entry - things other employees have to do.”

The school devotes considerable time to matching students’ skills with employers’ needs. “We’ve sent students to Marist and Georgia Tech to set up computers for the IT department,” said Garrett. “That’s a great use of their skills, since many 14- and 15-year-olds know more about IT than us geezers.”

Currently, Lenbrook’s interns are working in Human Resources, concierge services, marketing and the enrichment department that runs programs and services for residents. But IT may be another aspect of their job, said Keysor.

“It makes sense,” he said. “We work on all our residents’ computers, and these students are incredible with technology.”