A New Chapter: Retirees find a second career helping others to read 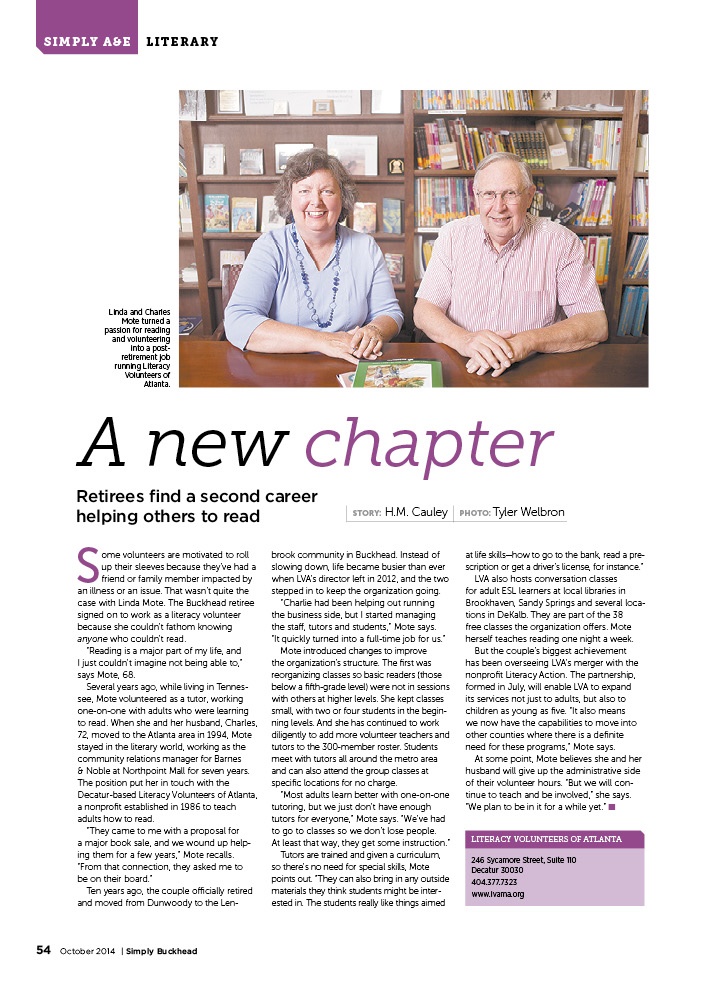 Photo: Linda and Charles Mote turned a passion for reading and volunteering into a post-retirement job running Literacy Volunteers of Atlanta.

Some volunteers are motivated to roll up their sleeves because they've had a friend or family member impacted by an illness or issue. That wasn't quite the case with Linda Mote. The Buckhead retiree signed on to work as a literacy volunteer because she couldn't fathom knowing anyone who couldn't read.

"Reading is a major part of my life, and I just couldn't imagine not being able to do it," says Mote, 68.

Several years ago, while living in Tennessee, Mote volunteered as a tutor, working one-on-one with adults who were learning to read. When she and her husband, Charles, 72, moved to the Atlanta area in 1994, Mote stayed in the literary world, working as the community relations manager for Barnes & Noble at Northpoint Mall for seven years. The position put her in touch with the Decatur-based Literacy Volunteers of Atlanta, a nonprofit established in 1986 to teach adults how to read.

"They came to me with a proposal for a major book sale, and we wound up helping them for a few years," Mote recalls. "From that connection, they asked me to be on their board."

Ten years ago, the couple officially retired and moved from Dunwoody to the Lenbrook community in Buckhead. Instead of slowing down, life became busier than ever when LVA's director left in 2012, and the two stepped in to keep the organization going.

"Charlie had been helping out running the business side, but I started managing the staff, tutors and students," Mote says. "It quickly turned into a full-time job for us."

Mote introduced changes to improve the organization's structure. The first was reorganizing classes so basic readers (those below a fifth grade level) were not in sessions with others at higher levels. She kept classes small, with two or four students in the beginning levels. And she has continued to work diligently to add more volunteer teachers and tutors to the 300-member roster. Students meet with tutors all around the metro area and can also attend the group classes at specific locations at no charge.

"Most adults learn better with one-on-one tutoring, but we just don't have enough tutors for everyone," Mote says. "We've had to go to classes so we don't lose people. At least that way, they get some instruction."

Tutors are trained and given a curriculum, so there's no need for special skills, Mote points out. "They can also bring in any outside materials they think the students might be interested in. The students really like things aimed at life skills -- how to go to the bank, read a prescription or get a driver's license, for instance."

LVA also hosts conversation classes for adult ESL learners at local libraries in Brookhaven, Sandy Springs and several locations in DeKalb. They are part of the 38 free classes the organization offers. Mote herself teaches reading one night a week.

But the couple's biggest achievement has been overseeing LVA's merger with the nonprofit Literacy Action. The partnership, formed in July, will enable LVA to expand its services not just to adults, but also to children as young as five. "It also means we now have the capabilities to move into other countries where there is a definite need for these programs," Mote says.

At some point, Mote believes she and her husband will give up the administrative side of their volunteer hours. "But we will continue to teach and be involved," she says. "We plan to be in it for a while yet."