Twins are double blessing to home 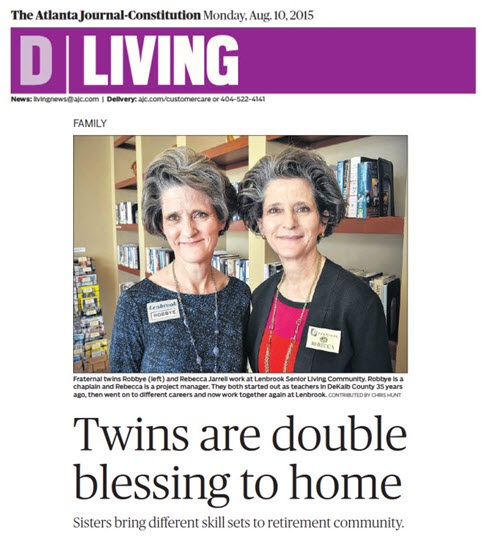 Their jobs at Lenbrook senior living community in Buckhead involve many responsibilities ranging from matters organizational to spiritual.

But most important of all, perhaps, they never leave home without their nametags. 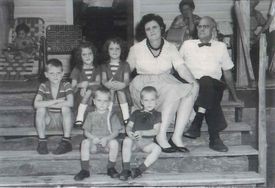 “We try to be mindful to always wear them,” said Robbye Jarrell, Lenbrook’s full-time chaplain.

Above: The Jarrell family in 1963: (back row, from left) Milton, Robbye and Rebecca beside their parents Frances Jarrell and John Jarrell.  PHOTO COURTESY OF JARRELL FAMILY

The 58-year-old native Atlantans are twins. Siblings who even now look so much alike that when Rebecca discloses they’re actually fraternal mates (or wait, was it Robbye who said that?), your first response is an eyerolling “Yeah, sure.” 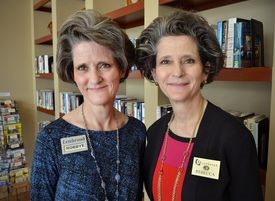 But who are we to argue with the twintessential experts on the subject? The Jarrells’ younger brothers, by two years, also are twins (there’s another older brother whom they affectionately call the family “singleton”). They all grew up in what’s now known as the Historic Zuber-Jarrell House in East Atlanta. It was built in 1906 by an unrelated-to-them wholesale lumber baron, who married soon after and promptly fathered — you guessed it — twins.

ABOVE: Fraternal twins (from left) Robbye and Rebecca Jarrell work at Lenbrook senior living community in Atlanta, where Robbye is a chaplain. PHOTO BY CHRIS HUNT

“There’s something in that house,” laughed Robbye, who’s older by 15 minutes.

Still, it would be a mistake to think of the Jarrells arriving at Lenbrook as some sort of package deal — or not standing out on their own as impressively accomplished individuals.

“They are so, so different,” said Felecia J. Sveda, Lenbrook’s vice president for hospitality services, who initially worked with Rebecca — and thought she was “hallucinating” the first time she saw Robbye strolling the same hallways. “And both bring very unique skill sets and traits to the table.”

Like many siblings, they shared interests growing up. As teens, they worked together at Six Flags. Both majored in music education at Samford University in Alabama, then went on to get their master’s degrees at Georgia State and to teach music for four years at different elementary schools in DeKalb County.

This was during the period of the Atlanta Missing and Murdered Children cases, a prolonged and tragic mystery that gripped the city and helped start Robbye along the road to chaplaincy. Some students at her school, Gresham Park Elementary, knew or were related to several of the victims. “I found myself wanting to do pastoral care with children,” she said. She wound up getting a master’s in divinity at Southern Baptist Theological Seminary in Lexington, Ky. (several years ago, she became an ordained Presbyterian minister).

Around this same time, Rebecca’s acumen for complex organizational management had become apparent, and she moved into human resources work. By 1998, the sisters were working and residing about an hour apart in North Carolina. Back in Atlanta, their widowed elderly mother needed more help living in that big historic house.

“We wanted to ‘team-care’ for Mom,” Robbye recalled about their joint decision to move back home.

While Robbye became chaplain in the oncology unit at Children’s Healthcare of Atlanta, Rebecca initially took on contract work that allowed for greater flexibility in helping their mother (Martha Frances Jarrell died in 2005 at age 86). Rebecca first arrived at Lenbrook as a contract employee in 2002; about a month before she came on staff full time, Robbye was hired to start a chaplaincy program for Lenbrook’s 500-plus residents.

Every Sunday, Robbye conducts an interdenominational service attended by as many as 80 people. She also coordinates a regular schedule of faith leaders who perform specific services — Friday Shabbat, Catholic Mass, Episcopal communion — and generally provides “pastoral care” to elderly residents and their families.

“I love her history. She says she’s come from serving God’s children to serving God’s former children,” Sveda said. Robbye seems to greet every resident by name while escorting a visitor through Lenbrook. “She is able to really read people, especially about the things they’re not saying.”

Rebecca, meanwhile, plans and manages numerous projects that touch on everything from staffing to facilities. When it comes to Lenbrook’s national accreditation — a process so comprehensive and demanding (conformance on 1,152 standards is evaluated every five years), only four continuing care retirement communities in Georgia even have it — she “quarterbacks” the whole effort, Sveda said.

The sisters, who are both single, share a home in Sandy Springs. At Lenbrook, though, their jobs are so different, they may go all day without seeing each other. (“Y’all are never together,” the quickwitted Rebecca recalled a co-worker’s surprised reaction one time upon legitimately seeing double Jarrells.) But point out that somehow, almost without intending to, they’ve ended up as opposite sides of the same invaluable coin when it comes to helping seniors enjoy safe, more fulfilling lives, and they don’t just smile. They offer up their own word for it:

Seems it flows both ways.

“Working here, you can’t help but think how you want to age,” Rebecca said.