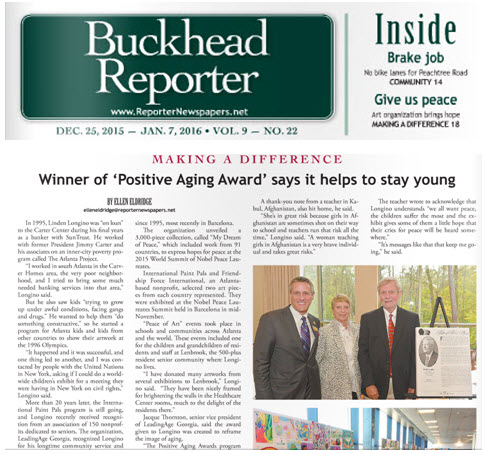 In 1995, Linden Longino was “on loan” to the Carter Center during his final years as a banker with SunTrust. He worked with former President Jimmy Carter and his associates on an inner-city poverty program called The Atlanta Project.
“I worked in south Atlanta in the Carver Homes area, the very poor neighborhood, and I tried to bring some much needed banking services into that area,” Longino said.

But he also saw kids “trying to grow up under awful conditions, facing gangs and drugs.” He wanted to help them “do something constructive,” so he started a program for Atlanta kids and kids from other countries to show their artwork at the 1996 Olympics.
“It happened and it was successful, and one thing led to another, and I was contacted by people with the United Nations in New York, asking if I could do a worldwide children’s exhibit for a meeting they were having in New York on civil rights,” Longino said.
More than 20 years later, the International Paint Pals program is still going, and Longino recently received recognition from an association of 150 nonprofits dedicated to seniors. The organization, LeadingAge Georgia, recognized Longino for his longtime community service and “positive aging” lifestyle.

Longino said his motto is “To stay young, help the young.”

The Paint Pals organization first exhibited at the 1996 Centennial Olympics in Atlanta and has mounted exhibitions around the world ever since, including at the Sochi Winter Olympics in Russia last year. “Art is a universal language for kids, and anyone really, to express themselves,” the Buckhead resident said. “International Paint Pals gives children a worldwide forum to express their views on global issues and share their similarities and differences through visual creativity.”

In total, more than 200,000 young artists from around the world have participated in International Paint Pals events since 1995, most recently in Barcelona. The organization unveiled a 3,000-piece collection, called “My Dream of Peace,” which included work from 91 countries, to express hopes for peace at the 2015 World Summit of Nobel Peace Laureates. International Paint Pals and Friendship Force International, an Atlanta-based nonprofit, selected two art pieces from each country represented. They were exhibited at the Nobel Peace Laureates Summit held in Barcelona in mid-November.

“Peace of Art” events took place in schools and communities across Atlanta and the world. These events included one for the children and grandchildren of residents and staff at Lenbrook, the 500-plus resident senior community where Longino lives.

“I have donated many artworks from several exhibitions to Lenbrook,” Longino said.  “They have been nicely framed for brightening the walls in the Healthcare Center rooms, much to the delight of the residents there.”
Jacque Thornton, senior vice president of LeadingAge Georgia, said the award given to Longino was created to reframe the image of aging. “The Positive Aging Awards program rightfully recognizes elders who are still generously giving of their time and talents to the community and changing the lives of others for the better,” she said. “These honorees show us how we can all continue to learn, grow and contribute at any age in life.” 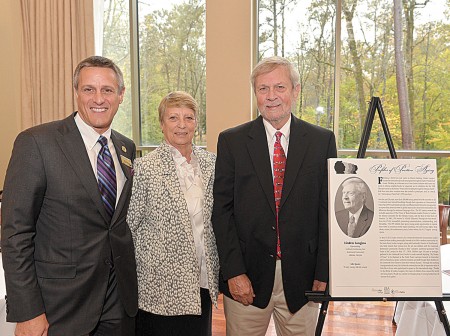 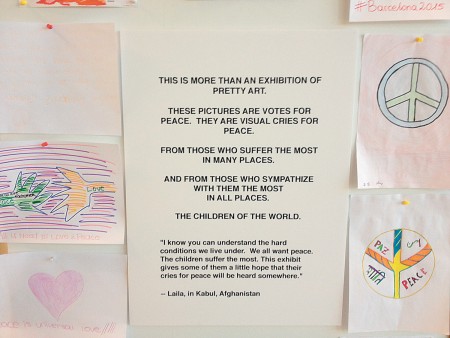 Earning the award made Longino feel “positively old,” he joked. “When we lose our sense of humor about the inevitable, then we truly are old.” As happy as Longino was with the recognition, he said what matters most is the people he helps.

“I was delighted to have the [LeadingAge Georgia] recognition, but I was more delighted when a Nobel Peace Prize winner came up and gave me a hug,” Longino said.

A thank-you note from a teacher in Kabul, Afghanistan, also hit home, he said.

“She’s in great risk because girls in Afghanistan are sometimes shot on their way to school and teachers run that risk all the time,” Longino said. “A woman teaching girls in Afghanistan is a very brave individual and takes great risks.” The teacher wrote to acknowledge that Longino understands “we all want peace, the children suffer the most and the exhibit gives some of them a little hope that their cries for peace will be heard somewhere.”

“It’s messages like that that keep me going,” he said.