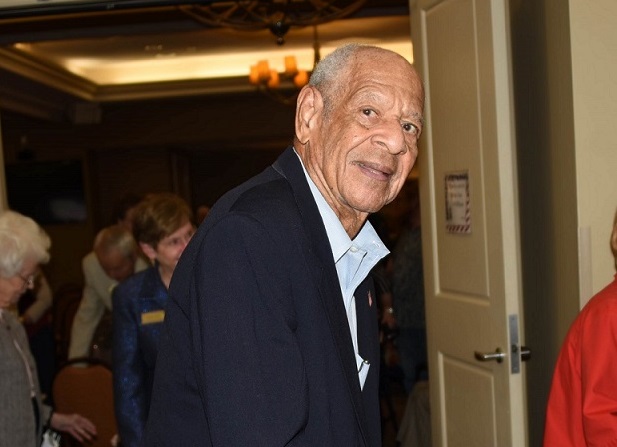 Love of Aviation Leads to Book

I happened to be born in St. Thomas the same year aviation pioneer Charles Lindbergh landed on our island. As a child, I watched as huge equipment dredged the Mosquito Bay located adjacent to Lindbergh's landing strip and transformed it into Lindbergh Bay. Perhaps that's how I came to be so interested in aviation and now, at 89, am getting ready to publish a documentary about aviation in the U.S. Virgin Islands from 1921 to 1971.

As a boy I was fascinated by the U.S. Marine aircraft pilots as they flew their land and amphibian craft from a facility still under construction on the island. And, I'd heard the stories of the explorers (and the pirates well before them) that used the U.S. Virgin Islands as a stopping point in their travels -- often heading on to West Africa. Sir Edmund Hillary was the most notable of explorers to visit St. Thomas.

Aviation or Engineering?
When I couldn't decide between a career in aviation or engineering, I chose both. With a civil engineering degree from Notre Dame, I accepted a position with Lockheed Aircraft in aircraft design. Later I joined the Air Force, piloting multiengine aircraft. I loved all the planes, but the T-29 was my favorite. Fortunately, my only close call was the time my aircraft iced up and stalled over the mountains near Salt Lake City, but we recovered.

One of my early jobs, after eight years of service in the Air Force, was with the Civil Aeronautics Administration (now called the FAA). There I provided aircraft inspection and design services for the region covering New York, Pennsylvania, Virginia, West Virginia and Kentucky.

Returning to the Island
My homeland drew me back and eventually I became executive director of the Virgin Islands Airport and Development Agency. I guess you could say I've always hand my hand in aviation one way or another.

Fantastic 60 Years
However, the luckiest thing that ever happened to me was my marriage to my wife Patricia. We were married 60 years, three months and two days. We came back to the U.S. in 2009 to be closer to our three children and we moved into Lenbrook in 2011. About that time I started working on a documentary about Caribbean aviation. But the book went on the back burner when my wife's health started to decline.

A Labor of Love
For the past year and a half or so, I've spent six hours a day working on the book, sometimes on the computer but mostly by longhand, which is my preference. The Lenbrook Enrichment Department has been helpful in getting my manuscript ready for final editing, which includes review by my children. I didn't want to share it with them too early in the process.

My father was a prolific writer and professional musician. I played the trombone as a child, although my listeners might disagree with that. Fortunately, my father's talent for writing stuck with me, just as my fascination with aviation has.

Alton Adams, Jr. earned his civil engineering degree from Notre Dame and pursued graduate studies at the graduate School for Public and International Affairs at the University of Pennsylvania. Alton's favorite books are historical and musical novels, which makes sense since his father was the first African American bandmaster in the U.S. Navy and was a nationally recognized musician and music columnist. Alton and his wife Patricia traveled the world and had two sons and a daughter. Alton's hobbies include writing and enjoying musical concerts and performances at Lenbrook.