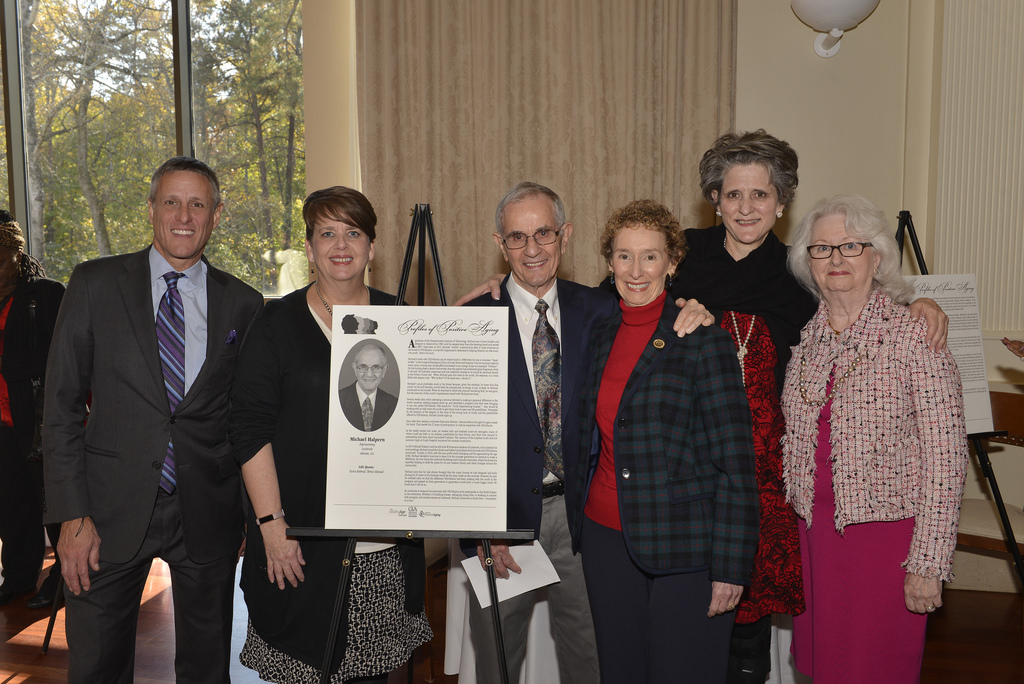 Michael Halpern co-founded the nonprofit inner-city mentoring program YES!Atlanta in 1988 and helped lead the organization for more than 27 years. He will be honored by LeadingAge Georgia at its annual Positive Aging Icon Award ceremony on November 18 at the Atlanta History Center.

YES! stands for “Youth Experiencing Success”. Its goal is to give at-risk teenagers a chance to experience personal success based on long-term regular support by committed, caring, and trained adults. As Michael explains, “It started with a small group of citizens concerned about despair among inner-city youth. We designed our first Rising Star program in 1990; Coaching for Success, working with the Juvenile Court, was launched in 1993. Over the years, YES!Atlanta  impacted the lives of nearly 1,000 teenagers by focusing on these five Program Cornerstones: Possibility, Responsibility, Commitment, Support, and Forgiveness.”

All who know and have worked with Michael know that when he takes on a responsibility, he gives it his all. “We are thrilled with LeadingAge Georgia’s recognition for Michael’s past service with YES!Atlanta. At Lenbrook, we benefit from his expertise every day. Since he and his wife Julie Witt moved here in 2014, he has become heavily involved with a number of our Resident Association Committees,” says Felecia Sveda, VP of Operations/Hospitality Services at Lenbrook, a Life Plan Community in the heart of Buckhead.

Michael, who currently serves as chair of Lenbrook’s Buildings and Grounds Committee, used his more than four decades of experience in residential homebuilding and design to help plan Lenbrook’s new library last year. “I enjoyed using my knowledge of CAD while working with Lenbrook’s professional architects to come up with solutions that really suit our community,” he says. Today, he is on the committees working closely with Lenbrook’s management team to plan renovations to the community’s Bistro – a casual and vibrant dining venue, slated to start next year.

After receiving his Bachelor’s degree with honors from MIT in Chemical Engineering, Michael joined his father, a homebuilder in New Rochelle, NY. During the Berlin Crisis in 1961 his Army Reserve unit was activated and he spent ten months in North Carolina at Ft. Bragg, where he realized that Atlanta, one of the country’s largest single-family home markets, offered outstanding opportunities for new home builders. Moving here in 1962, he started The Halpern Corporation and went on to build more than 400 homes throughout DeKalb, Fulton, Cobb, and Gwinnett counties, designing the majority of them himself until his retirement in 2007.

For years frequent and intense exercisers, Michael and Julie had planned to remain in their long-time Buckhead home into the distant future. His decision in December 2013 to have a long-deferred knee replacement required a cardiologist’s clearance that uncovered a very serious heart condition necessitating immediate quintuple bypass and aortic valve replacement. While Michael was recovering, the couple concluded that “…the future is no longer as certain as we thought it was.” This reality led to their decision to move to Lenbrook, “…an ideal place to live and love as we grow old together,” according to Julie.

“It’s the best decision we could have made,” says Michael, a long-time MENSA member and a past president of the Atlanta Rugby Football Club. “We have access to a great fitness center, where we exercise more intensely than ever, an indoor pool, 24/7 healthcare, five different dining venues on campus, and more opportunities to enjoy programs, classes and socializing than we can schedule. We are still close to our long-term friends, shops, and doctors. The biggest and best surprise, however, has been Lenbrook’s social environment. Where else can you connect with more than 500 interesting, active people at the push of an elevator button?”

Interesting and active are just two of the adjectives that can be used to describe Michael, who has three sons with his first wife, Barbara, an accomplished playwright with the old Academy Theatre. “I like to think of Barbara and Julie, who quickly became good friends after they met, as my real mentors,” says Michael. “They actually banded together to get me to retire from my residential construction business just before the 2007 recession!”

“Thanks to Barbara, I became involved with the Atlanta theater community, and discovered a whole new passion. For more than 20 years, I designed theatrical sets – the highlight of which was my selection by the Atlanta Circle of Drama Critics for their Best Set of the Year award in 1977”, he smiles.

“Thanks to Julie, I am living my best life right here, right now. Like me, she is also very involved with various Resident Association committees at Lenbrook, and we are happy that we live in a large apartment, the Andrews in the Lenox Tower, where we share a small office and bounce ideas off each other.”

Everyone who meets Michael Halpern knows why he was selected as an honoree at LeadingAge Georgia’s 2018 Positive Aging Icon Awards: He is truly a positive force and inspires all he meets with his energy, intellect and compassion.