April is Parkinson’s Awareness month. Each day, 37 people in the USA are diagnosed with this disease. It is one of the most common, long-term neurologic disorders where the central nervous system degenerates, and that affects the motor system.

As described on Parkinsons.com: “In the normal brain, some nerve cells produce the chemical dopamine, which transmits signals within the brain to produce smooth movement of muscles. In Parkinson's patients, 80 percent or more of these dopamine-producing cells are damaged, dead, or otherwise degenerated. This causes the nerve cells to fire wildly, leaving patients unable to control their movements. Symptoms usually show up in one or more of four ways:

* tremor, or trembling in hands, arms, legs, jaw, and face
* rigidity, or stiffness of limbs and trunk
* bradykinesia, or slowness of movement
* postural instability or impaired balance and coordination.

Though full-blown Parkinson's can be crippling or disabling, experts say early symptoms of the disease may be so subtle and gradual that patients sometimes ignore them or attribute them to the effects of aging. At first, patients may feel overly tired, "down in the dumps," or a little shaky. Their speech may become soft and they may become irritable for no reason. Movements may be stiff, unsteady, or unusually slow.”

Lenbrook, Atlanta’s premier senior living community has a multi-disciplinary approach to supporting residents with Parkinson’s disease. Since 2021, Lenbrook offers two complementary programs: the monthly Parkinson’s Support Group, which features subject matter experts and an opportunity to learn and share led by enrichment Chaplains; and the weekly Bold Moves Exercise Class, instructed by Lenbrook’s Fitness Manager, Charles Bartlett: “Without a doubt, the Bold Moves class is my favorite class to instruct!”

Last year, Lenbrook had the honor of being chosen as one of two pilot sites for this program offered by the National Institute for Fitness and Sport (“NIFS”), and after great feedback, NIFS has decided to introduce Bold Moves to other senior living communities as well.

Bold Moves as a program only works when you have a team in place. Lenbrook’s team includes the Fitness Center staff, the Parkinson’s support group coordinated by our chaplaincy, and of course the caregivers, spouses, and other family members. This constant support is critical to keeping participants engaged, motivated, and wanting to come back to the next class.

So whatever your Parkinson’s journey may be, just know that you are not alone; there is a community of folk right here at Lenbrook, eager to meet and support you. 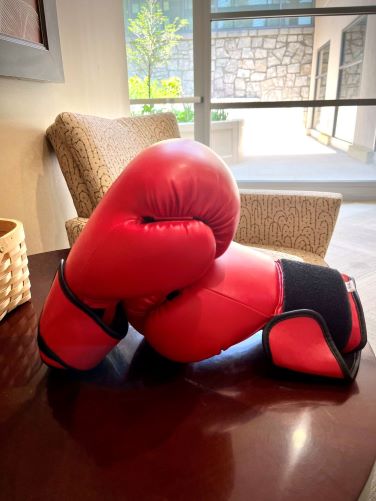