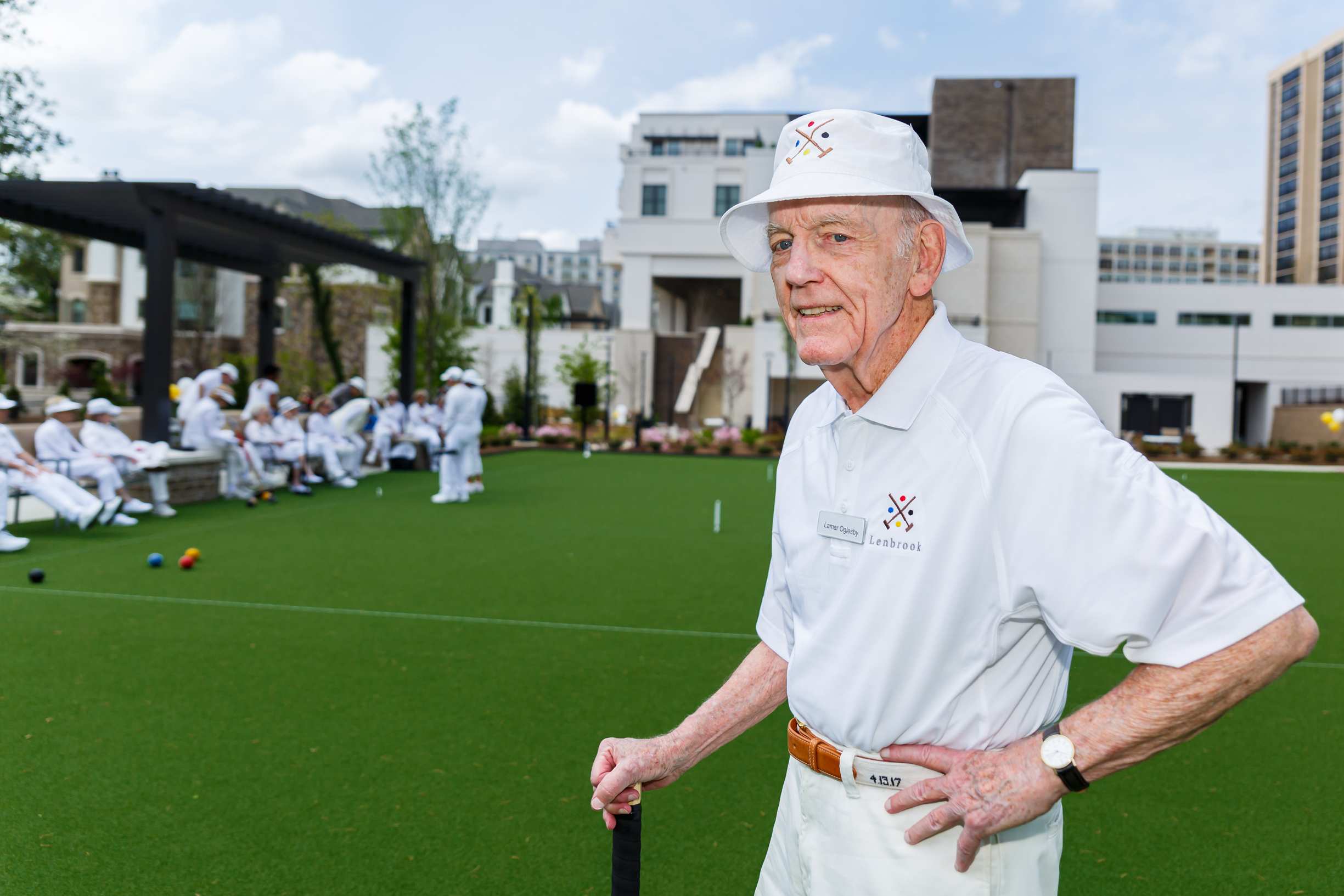 Several days per week, if the temperature is at least in the 50s, you will find Lamar Oglesby out playing golf croquet on Lenbrook’s beautiful regulation-size croquet lawn.

“We, the members of the Lenbrook Croquet Task Force, were pleased to get the (croquet) ball rolling at Lenbrook and honored to work closely with Lenbrook’s management team to realize the construction of Lenbrook’s croquet lawn as part of the 2021 Kingsboro at Lenbrook expansion,” says Mr. Oglesby, an active nonagenarian and longtime resident of Lenbrook. He and his wife moved from their Buckhead home one block from the Georgia Governor’s Mansion to one of Lenbrook’s eight Garden apartments in 2010, particularly because of Lenbrook’s healthcare options right on campus.

When his wife stopped playing golf, the couple took up playing golf croquet – something they could play together. A golf friend had invited him to learn more about the game, but Mr. Oglesby was a bit skeptical. “Honestly, I thought, ‘Who wants to play that silly game?’ I was thinking of the backyard croquet game so many people play at family gatherings. But I found out soon that comparing backyard croquet to golf croquet is like comparing Tiddlywinks with chess!”

The Oglesby’s summer in Highlands (NC) and belong to the Highlands Country Club, which boasts three croquet lawns and more than 280 active croquet players.  When the Highlands Country Club wanted members to learn more about croquet, Mr. Oglesby and others visited the United States Croquet Association in Palm Beach, where they took some lessons, learned to play better, and became more knowledgeable about the rules of the game. Mr. Oglesby notes that he is always eager to introduce more people to this great game, though he emphasizes that he’s not a croquet expert - one could compare his croquet skills to a golfer with a 12-14 handicap.

Today, golf croquet remains quite popular with the many empty nesters who summer in this beautiful part of North Carolina. The game appeals because people get together with friends, move around, breathe in the fresh air, use mental skills to strategize the game, and just have fun. Most golf croquet games take about an hour to complete, depending on one’s skill level. “For years, both my wife and I enjoyed the game – and Wine and Wickets every Tuesday and Thursday, too,” smiles Mr. Oglesby.

Last Fall, the Lenbrook Croquet Lawn was inaugurated. The regulation-size lawn includes two beautiful half-courts on artificial turf. As Mr. Oglesby explains: “There is no real grass suitable for golf croquet that will stay green all year in Atlanta. Artificial turf is perfect for this area and it also requires less maintenance, lasts more than 10 years, drains well, and above all, plays well.”

Golf croquet, the game played at Lenbrook, is easy to learn and great fun for beginners and expert players. It is different from Association croquet: in golf croquet, each player takes turns, rather than watching a player on a run. Golf croquet is played with two or four players and four different colored balls: Blue, Red, Black, and Yellow – always played in this sequence, with one shot per turn. The object of the game is to be the first side to score seven points or be ahead when time is called. Of course, players are strongly encouraged to wear their ‘croquet whites,’ and residents can now get their own Lenbrook croquet shirts.

“Come find out what golf croquet is all about – wicket fun with your friends at Lenbrook!”