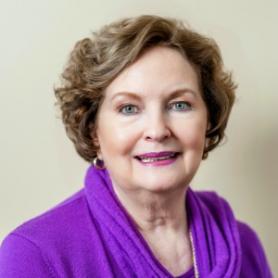 Lenbrook resident, Gracie Phillips, grew up in Lakeland, Georgia, attended Agnes Scott College, and married and raised four children in Atlanta.  Although she had definite roots in Georgia, she didn't ever hesitate to leave ... to explore the world with her husband.

Gracie and her family were avid travelers. All of Europe, the Baltics, Africa, Australia.  In her colorful family voyages, they hardly missed a continent or a grand adventure. Gracie claims Asia ... Cambodia in particular ... was one of her favorite places. "It was such a unique and different lifestyle to experience," she remembers.

While Gracie traveled far and wide, when stateside and back at home, she took her career a long way, too.  A stay-at-home mom for many years, she was lured back into the workforce by an offer to be the campaign treasurer for, then gubernatorial candidate, Joe Frank Harris.  Mr. Harris won the election and asked Gracie to join his Staff in the Governor's Office. She served on his Sr. Staff as an Executive Assistant for the next 8 years. After Governor Harris left office, Gracie worked for the State Board of Workers' Compensation as a Division Director.  During her tenure there, she was nominated to the prestigious Academy of Women Achievers by the YMCA.

Gracie certainly has led a "worldly" life. And still, she is having a ball.  Gracie loves everything about her current life at Lenbrook. She adores the people. "They're like family." She loves the activity. "I spend my days running from one activity to another. I do yoga. Tai Chi. Water aerobics. The exercise programs are wonderfrul." And she loves the fact that there are three different dining rooms with hundreds of choices. "Hey! I don't have to cook!"

Gracie so enjoys the community that she is getting even more involved. She is soon stepping up to be the president of Lenbrook's Resident Association.

Although she chooses to stay very busy and active each day, Gracie says, "You have the opportunity to do as much or as little as you want. Moving to Lenbrook was one of the best decisions I've ever made." Apparently, she thinks Lenbrook is another one of the greatest places on earth.

"My dad. He said, every day, do the best you can and try to leave the earth a better place."

"Of course, I'm so proud of my children and grandchildren. But career-wise, the night Joe Frank Harris was elected as Governor of Georgia."

Everything! Life here is so much fun. I especially like the birthdays and newcomers' parties. We have a great time."