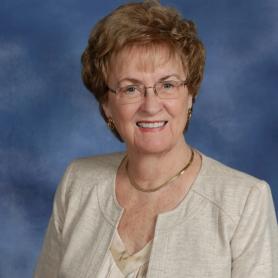 Iva, a former Braniff Airline flight attendant, not only flew all over the country, she later lived all over the country, because of her husband's job. But she was born and raised in Corpus Christi, Texas. They say things are "bigger" in Texas. So maybe that’s where Iva developed her sense of caring and compassion, because it's huge.

Iva recently moved to Lenbrook but spends plenty of her waking hours volunteering in Atlanta and Sandy Springs. She's always been involved and has an obvious passion for helping those in need. Several days a week, she works at Mount Vernon Presbyterian Church. She assists with the Family Promise outreach program, an organization that helps homeless families. She also works with the church's Los Ninos Primero program, which gets Latino preschoolers ready for elementary school.

While Iva stays very busy helping the Atlanta community, she is finding time to enjoy her new community of Lenbrook as well. She loves the exercise programs and the multiple dining choices. And she says, from the get-go, her new neighbors made her feel welcome and at home. Says Iva, "Everyone I met looked me right in the eye and said, 'Boy, you're going to like it here!'" They were right.

Iva was sold on Lenbrook when she was "shopping" senior communities and spent the night in one of Lenbrook's guest suites; the stay was organized as a way to "test drive" Lenbrook. It happened to be the day of the infamous 2014 Snow Jam and she unexpectedly had to extend her stay. She said, while all of Atlanta was shutting down, Lenbrook stayed buzzing. "It was amazing," says Iva. "They only had half the staff, but everything ran smoothly. We were all well-fed, safe and warm. They really had their act together…and during a terrible storm. That said a lot to me."

Iva has always been one busy volunteer.  But now that she lives at Lenbrook, and isn't weighed down by home maintenance and repair, she has more time than ever to do the volunteer works she so loves.  Plus, Lenbrook's Buckhead setting puts her close to her children, her church and the city. After living all over the country, Lenbrook seems like the perfect location for Iva right now. She says, "Lenbrook has it all. And more."

"Oprah Winfrey. It's amazing how far she's come and how much she's done."

"I'm so proud of my children and how they've found the careers they were meant to have.  From the time they were toddlers, my son and daughter knew exactly what they wanted to do in life. And they are doing it!

"And they've given me three precious grandchildren.  James Corbin is married to Courtney, and they are giving me my first great grandson in July 2015!  Lally Corbin is engaged to Jon, and they are marrying in January 2016!  Zoe Lukashevich is a freshman in college!"

"The valet parking! It's not only great for me, it's wonderful for my friends and family who come to visit."