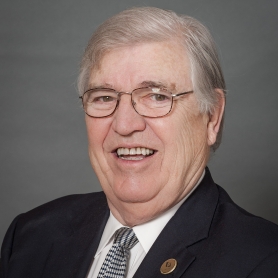 Anyone who knows Dick Stormont would tell you he’s a driven man. Dick built an extremely successful four decade career in the hospitality industry, traveling across the world. He’s been a business leader, and a chairman of a number of groups promoting tourism, serving two terms as Chairman of the Atlanta Convention and visitors Bureau. He was the founder and President of the Georgia Hospitality and Travel Association and instrumental in hospitality during the 1996 Olympics. It’s very apparent by his impressive accomplishments, that Dick was always driven. What many don’t know, though, is that Dick started driving…literally…when he was only 12 years old.

“My father was a Doctor who made house calls, often late into the night,” says Mr. Stormont. “He counted on me to drive him from patient to patient. I started when I was only 12. ‘Sounds crazy, but things were a little different back then…"

His early days behind the wheel with his Dad gave Dick a love for cars (“I’ve owned 14 convertibles in my life.”) and an appreciation for dedication and hard work. After graduating from Cornell University School of Hotel Administration, he joined the Navy, which landed him in Athens Georgia for post Graduate study at the Navy’s Supply Corps School. There, he met his wife (“…and still best friend!”) Louellen Walters. They have three children and have been married for 57 years.

In the Navy, he served in the Pacific as a Supply Corps Officer on an Aircraft Carrier and then on the NATO U.S. Headquarters staff. Following over three years in the NAVY, he was lucky enough to be hired by a small, unknown company that was dabbling in the hotel industry. They had 13 small fast food restaurants and two hotels, at the time. Their name was Marriott.

Dick stayed with the Marriott Corporation for 22 years. He was involved in the franchise development and operation of Marriott Hotels. With the creation of the Courtyard by Marriott and Marriott full-service Hotels he traveled all over the world. He met fascinating people, closely with J.W. Marriott Jr. “I still have a quote from J. W. Marriott Sron my office wall,” says Dick. “It concludes with;Good timber does not grow in ease - the stronger the wind, the tougher the trees.” Author unknown

His Marriott experience “drove” Dick to start his ownbusiness, The Stormont Companies, LLC. which evolved into a highly successful property management and development firm. Dick was at the helm for 22 years and now serves as a Trustee and a consultant, with the development company still strong under the leadership of his former Chief Financial Officer, Jim Stormont Jr.

Dick retired and he and Louellen moved to Lenbrook about four years ago. They chose the community, because, as Dick says, “Like my business, Lenbrook is committed to a very high degree of quality. The services are better than any in the industry. And the activities are exciting, fun and frequent!”It probably comes as no surprise; Dick still has that insatiable drive. He is very involved in the community and soon to be the President of Lenbrook’s Residents Association. You know, with his talent, knowledge and vast experience, things at Lenbrook are going to be full speed ahead.

The proudest moment. “It would be hard to discern the proudest moment of my life other than the joy of a wonderful marriage and family”.  A successful business that made a lot of people happy and have successful lives on their own is certainly a very satisfying effort” There is certainly a lot of joy in completing a project or development from a vision to fruition. It’s very exhilarating to do that.”

Words to live by. “It’s better to light the candle than to curse the darkness.” Author unknown

Favorite thing about Lenbrook. “The quality: the people, the health care, the services. All are best in class.”