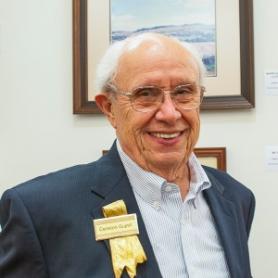 A native of Maine, Carleton Guptill’s long and impressive list of lifetime achievements is one for the books.  In fact, much of it has involved books, as he spent most of his career in the academic world.

After receiving his BA and Master’s degrees from Emory University and a PhD from Duke University, Carleton taught sociology for 15 years at the University of Maine.  Later on he redirected his career into Health Planning.  He continued to teach as well as take on prestigious health-related research projects.  In 1980, he was awarded a fellowship to study nursing homes in Georgia.  He retired in 1999.

But Carleton’s achievements aren’t limited to academia and the field of health.  He is also an accomplished musician and played the French Horn with the Atlanta Symphony for 15 years.  During retirement he has played with a variety of community bands or orchestras in the Atlanta area.  He sings in his Decatur church choir and in a Lenbrook choral group, as well.

It probably comes as no surprise that Carleton is very active and involved at Lenbrook, too.  He enjoys the classes…he’s currently learning how to draw.   He sits on two committees; he is chairman of the Religion Committee and is on the Friends of the Arts committee, a group that brings a variety of performances into the community every month.

“Because of my career in health, I understand the importance of accreditation,” says Mr. Guptill.    That’s one of the main reasons he and his wife Fay chose Lenbrook.  Lenbrook is the only Atlanta retirement community to be accredited.  Carleton says, “I’ve worked with hospitals and universities that had to go through the accreditation process and I know how hard it is.  Lenbrook chose to go through this.  This says to me, not only high standards, but that  Lenbrook is willing to open up to third-party evaluation.  They have nothing to hide.”

Carleton is obviously a smart man and he feels he made an intelligent choice in moving to Lenbrook.  “My parents lived in a CCRC for many years.  I knew what to look for. And we didn’t need to look any further than Lenbrook.”

“My sociology professor at Duke, Kurt Back.  He was a major influence in my life.”

“All the years I spent playing in the Atlanta Symphony Orchestra.”

“The people.  Both the staff and the residents.  Everyone has a smile.  Everyone knows your name.”